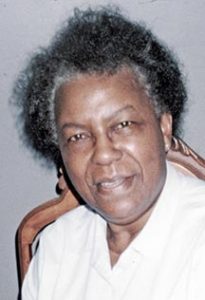 Her funeral services are scheduled for Friday afternoon November 15th at 1 p.m. from the Carthage Chapel of Sanderson Funeral Home with her longtime former pastor, Rev. Willie Cameron officiating and delivering the eulogy.

The Carter family will receive friends at Sanderson in Carthage only on Friday November 15th from noon until the services at 1 p.m.

Family and friends will assemble at the Middle Tennessee Veterans Cemetery at 7931 McCrory Lane in Nashville, 37221, for the 11 a.m. Monday morning November 18th committal service and interment beside her husband of over forty five years.

The seventh of nine children of the late Robert Garrett and Nannie Louise Nixon Garrett, she was born Robbie Key Garrett in the Riddleton Community on December 22, 1927.

In Carthage in 1949, she was united in marriage to Stonewall Community native, the late Willie Roy Carter who transitioned to his heavenly home on July 18, 1994 at the age of 69. Her beloved husband and the father of their five children was a Smith County educator, occupational therapist at the Alvin C. York Medical Center in Murfreesboro, and also a longtime employee of the Citizens Bank in Carthage.

Mrs. Carter professed her faith in Christ at a young age and joined the Williams Chapel A.M.E. Methodist in the Riddleton Community and later in life became a faithful and dedicated member of the Braden United Methodist Church on the Square in Carthage.

Her church family always looked forward to her fried fruit pies and chocolate pies she provided at church functions and which she often delivered with a warm smile to her friends in the Carthage Community.

Mrs. Carter was a 1944 graduate of Wilson County High School in Lebanon.

She maintained an immaculate home for her family and was a devoted worker in her church.

Mrs. Carter was also a member of the Cumberland Chapter # 267, Order of the Eastern Star in Carthage and was a Past Worthy Grand Matron.