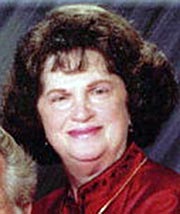 Mrs. Mary Layell, a homemaker of the Rome Community, died at 6:32 a.m. Wednesday morning November 13, 2019 at the age of 82 at the St. Thomas Mid-Town Hospital in Nashville.

Mrs. Layell was cremated at Cumberland Funeral Services in Algood and a private family service will be conducted at an unspecified time.

Born January 4, 1937 in Marietta in Cobb County, Georgia, she was one of fourteen children of the late Herbert and Audrey Irene Maxson Brown.

In Ringgold, Georgia on January 17, 1969, she was united in marriage to Beaver Dam, Virginia native Robert Lee Layell.

They were preceded in death by a daughter, Wanda Layell Vollbrecht who died at the age of 61 on December 13, 2018.

Mrs. Layell was a member of the Berachah Church in Houston, Texas.

She and Mr. Layell relocated in 1991 from Houston and purchased a home on Roberts Lane in the Gray Roberts Subdivision in the Rome Community.

For a while after moving to Smith County Mr., Layell commuted back to Houston to close out his family roofing company.