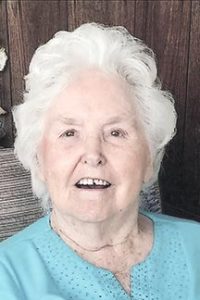 Mrs. Thelma Lankford Taylor of Manchester and a longtime homemaker of the Difficult Community, died at 1:45p.m. Monday afternoon November 25, 2019 at the age of 94 at the Bridlewood Farm of her daughter and son-in-law in rural Coffee County.

Her pastor, Eld. Witt Cook, officiated at the 1 p.m. Wednesday afternoon November 27th funeral services. Following the services from the Carthage Chapel of Sanderson Funeral Home burial was between her first husband and her son in Section five at the Defeated Creek Memorial Gardens.

After the death of Mr. Sterling she was united in marriage on December 7, 1997 to Monoville Community native Ernest Reginal Hackett. He preceded her in death on December 1, 2003 at the age of 90.

At the age of 19 she was saved and in 1944 was baptized into the full fellowship of the Defeated Creek Missionary Baptist Church in the Difficult Community where she remained a member until her death.

The family has requested memorials to the Defeated Creek Missionary Baptist Church.