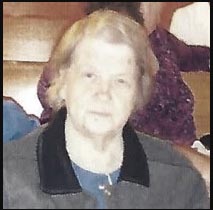 Mrs. Bush was born April 17, 1939 in the Dillard’s Creek Community of Smith County, TN, a daughter of the late Charlie Lambert and Estell King Lambert. She married Frank Carol Bush on September 5, 1959 and he preceded her in death on October 31, 2007. She was also preceded in death by Brothers; George Lambert and Charles Lambert. She worked at the Carthage Shirt Factory for six years. Mrs. Bush was a Methodist.

Funeral Services for Mrs. Bush are scheduled to be conducted from the Carthage Chapel of Bass Funeral Homes on Thursday, December 5, 2019 at 1PM with Bro. Dickie Johnson officiating. Interment will follow in the Dickens Cemetery in Maggart, TN.

Visitation with the family will be at the Carthage Chapel of Bass Funeral Homes on Wednesday from 2PM until 8PM and again on Thursday from 11AM until service time at 1PM.

In lieu of flowers, the family requests memorials be made to the American Cancer Society.