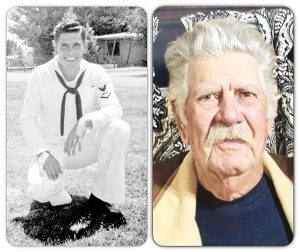 Billy Joe Bush, 84, passed away Saturday evening December 7, 2019 at his home of 52 years on Pea Ridge Road in the Chestnut Mound community.

His funeral took place at 1p.m. on Monday, December 9th at the Chestnut Mound Missionary Baptist Church followed by burial in the church’s cemetery. Brother Jeff Burton led the ceremony.

Sidney and Gracie made their home in the Maggart Community and raised four children: Billy Joe, Robert Frank, who passed away on July 7, 2002 at the age of 62, Doris Ann, and Linda Grace.

Doris Ann is married to Reverend Frank Eddie Blair, they live in Murfreesboro and Linda was married to the late Teddy Allison, she still lives in their marital home in the Rawls Creek community.

Billy Joe attended the Maggart School and often shared the story of how he walked to and from school every day and arrived early when it was cold to start a fire in the potbellied stove, a chore for which he earned a nickel.

Billy Joe graduated from Smith County High School in 1954 where he played basketball for three years and was a member of the Future Farmers of America.

Upon graduation he joined and served 4 years in the United States Navy as a mechanic.

In the early days of their marriage, Billy Joe drove a milk truck and delivered the product to the Borden’s Milk Company in Carthage. He also worked at a tool and dye company and utilized his skills as a Navy mechanic when the Douglas Aircraft, Company opened a plant in Carthage. He stayed there until the operation moved to California.

Most folks remember Billy Joe for the many years he spent in the home improvement business. He put up aluminum siding, later vinyl siding, storm windows/doors and gutters on homes and businesses across the region.

He served several terms on the Smith County Commission beginning in the early 1970s.

In his spare time, Billy Joe enjoyed boating, water skiing, fishing and playing golf. He was a member of the Green Hills Golf and Country Club for many years.

Keri and Daniel live in the Tanglewood community and have three daughters: Ella Grace, 6, Ruby Jo, 3, and Cora Mai, 11 months.

Kristen and John live in the Tanglewood community and have a one-year old son: John Arthur Sanders V (Quin).
Joey has a daughter, Hannah Elizabeth Bush who lives in Lebanon.

Or, you can make a donation to the Jordan Hackett Foundation. Their address is PO Box 45, Carthage, TN 37030.