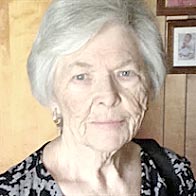 Mrs. Webster was born September 18, 1934 in Liberty, TN, a daughter of the late James Ed Thomas and Ollie Poss Thomas. She married J T Webster on December 22, 1956 and he preceded her in death on October 31, 2018. She was also preceded in death by siblings; Wilma Taylor, Mazelle Cruz, Frances Frazier, Lulu Shelton, Fanny Todd, and James Thomas.

Mrs. Webster was a 1952 graduate of Liberty High School. She began worked at DTC Communications full time for thirty years from 1969 until her retirement in 1999. After her retirement, she worked continued to work at DTC Communications part time from 1999 until 2013. Mrs. Webster was a longtime member of the Union Hill Cumberland Presbyterian Church, having taught Sunday School for several years. Mrs. Dot was an Auxiliary Member of the Gideons International. She and her late husband, J T were both very active in the Gideons.

Funeral Services for Mrs. Webster are scheduled to be conducted from the Gordonsville Chapel of Bass Funeral Homes on Sunday, December 29, 2019 at 2PM with Eld. Steven Brooks officiating. Interment will follow in the Union Hill Cemetery.

Visitation with the Webster family will be held at the Gordonsville Chapel of Bass Funeral Homes on Saturday from 1PM until 8PM and again on Sunday from 12PM until the time of the service at 2PM.

In lieu of flowers, the Webster family requests donations in Mrs. Dorothy’s memory be made to the Union Hill Cemetery Mowing Fund.