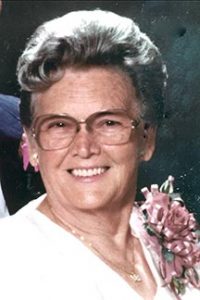 Mrs. Louise Holland age 94, a homemaker of the Bagdad Community, died peacefully Saturday afternoon December 28, 2019 at the Mabry Assisted Living in Gainesboro where she had been a resident for only twelve days. She was pronounced deceased at 3:11 p.m. by Kindred Hospice of Cookeville.

Funeral services were conducted Tuesday morning December 31st by Edward L. Anderson from the Hackett Chapel of Sanderson Funeral Home. Following the 11 a.m. services burial was beside her husband in the Holland Family Cemetery in the Bagdad Community.

In Franklin, Kentucky on March 31, 1944, she was united in marriage to Bagdad Community native Aaron Dillard Holland who preceded her in death on November 25, 1995 at the age of 70 following over fifty one years of marriage.

They were preceded in death by a son, Charles Ralph Holland who was the first Jackson County soldier to die in Vietnam on December 19, 1967 at the age of 22.

Another son preceded her in death, Dillard Wayne Holland who died at the age of 63 on July 26, 2010.

Mrs. Bray confessed her faith in Christ at the age of 12 in 1937 and was saved in baptism at the Bagdad Church of Christ where she had been a dedicated member for over eighty two years.

She was a thirty five year employee at Heavy Duty Manufacturing in Gainesboro from which she retired in 1989.

The Holland family requested memorials to either the Holland Cemetery Mowing Fund or the Charles Ralph Holland Library in Gainesboro.