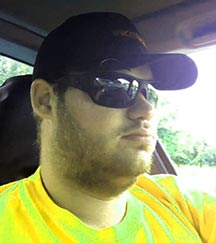 Mr. Ryan Williams age 22, a resident of West Walnut Street in Dickson, was pronounced dead on arrival at 1:29 a.m. Wednesday morning January 1, 2020 at the TriStar Horizon Medical in Dickson from injuries received in an automobile accident reported to the Tennessee Highway patrol at 11:26 p.m. Tuesday evening January 31, 2019 on West Piney Road in rural Dickson County.

Monday morning January 6th funeral services were conducted from the Carthage Chapel of Sanderson Funeral Home. Bro. Johnathan Hankins officiated at the 11 a.m. services. Graveside services and interment were Monday afternoon at 2 p.m. at the Blackburn Cemetery on Wheeler Mountain near Pikeville.

One of nine children he was born Ryan Glenn Williams in Nashville on August 27, 1997 and was the son of Cindy Lee Johnson Tedrow of Dickson and Thomas Scott Williams of LaVergne.

Mr. Williams was a Dickson County farmer and was a 2016 graduate of Smith County High School.