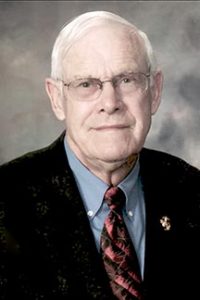 Retired Missionary Baptist pastor and U. S. Marine Korean War veteran Eld. Billy Shoulders died peacefully Tuesday afternoon January 7th at 1 p.m. at the Smith County Health and Rehabilitation Center in Carthage where he had been cared for since December 31st.

Funeral services were conducted from the Carthage Chapel of Sanderson Funeral Home on Friday afternoon January 10th with Eld. Rickey Hall and Eld. Gary Drennan officiating. Following the 1 p.m. services burial was beside his wife and daughter at the Beasley Cemetery in the Graveltown Community.

Eld. Shoulders was a 1953 graduate of Smith County High School where he majored in Agriculture.

At the home of Tim Shoulders in Carthage on August 29, 1959, he was united in marriage to

They were preceded in death by their daughter, Jolonda Lynn Shoulders who died as the result of a massive stroke on November 19, 1992 at the age of 31.

Eld. Shoulders was saved on October 4, 1946 at the age of 11 under the preaching of the late Eld. Calvin Gregory and was baptized into the full fellowship of the Russell Missionary Baptist Church by the late Eld. F. W. Lambert on October 13, 1946.

He retired from the U. S. Army Corps of Engineers in July of 1990 with thirty five years and six months of service. He served as maintenance foreman while at the Cordell Hull Dam and prior to the completion of the dam in 1969 he was employed by the Corps at the Center Hill Dam.

In 1968 Bro. Shoulders received his call from God to preach God’s word and on Sunday afternoon June 30, 1968 at the Russell Hill Missionary Baptist Church he was ordained into the full work of the ministry by Eld. Harold Dean Linville.

Eld. Shoulders proudly honored our country by joining the United States Marines in 1953 and was promoted from the rank of Private to the rank of Sergeant on October 1, 1955.

He was honorably discharged on July 10, 1956 from the 2nd Battalion, 2nd Marine Division at Camp Lejeune North Carolina with a total of one year, three months and fifteen days of his service being assigned to overseas duty.

He was the epitome of the definition of a soldier. “Free to be a hero, their courage to be worthy of honor, and their sacrifice which gives us freedom.”

Surviving is his son, Shannon Shoulders of the Tanglewood Community; grandson, Charles Smith and wife Sara of the Double Springs Community in Putnam County; sister, Geraldine Shoulders Gregory of the Four Way-Inn Community.