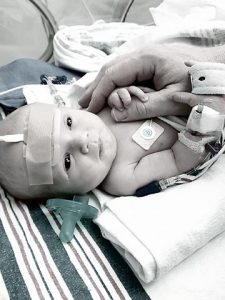 Master Jack McCaleb, age 2 months, died in the presence of his parents at 3:26 p.m. Friday afternoon January 10, 2020 at the Vanderbilt Children Hospital on Nashville.

The McCaleb family will receive friends at Sanderson in Carthage only on Saturday January 18th from 10 a.m. until the services at 3 p.m.

Born Jack Reagan McCaleb at the Summit Medical Center in Hermitage on November 19, 2019, he is the son of Bryan Dale McCaleb and Heather Lorane Richardson McCaleb of the Bluff Creek Community.