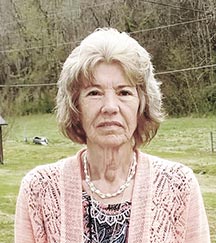 Mrs. Sue Washer age 69 of the Lock Seven Community died Monday morning January 13, 2020 at 9 a.m. at her Lock Seven Lane home surrounded by her family who had lovingly cared for her in the final days of her illness suffering from a brain tumor. She was pronounced deceased at 10:05 a.m. by HighPoint Hospice of Cookeville who had been assisting the family with her care.

Bro. Jimmy Gregory officiated at the 1p.m. funeral services from the Carthage Chapel of Sanderson Funeral Home which were conducted Wednesday afternoon January 15th. Burial followed beside her husband in the Garden of Everlasting Life at Smith County Memorial Gardens.

At the Carthage Church of the Nazarene on December 4, 1965, she was united in marriage to Bluff Creek Community native Bernice Clay Washer who preceded her in death on January 29, 2018 at the age of 74. The ceremony was performed by then church pastor, Rev. Merle Meade.

Mrs. Washer was a longtime employee of the former Carthage General Hospital working in the housekeeping department.

She was a member of the Carthage Church of the Nazarene.