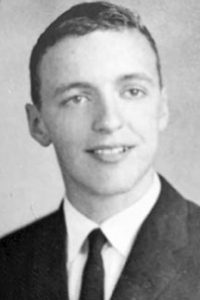 A quiet and refined Southern Gentleman has died unexpectedly at the age of 73.

Mr. Doug Hall of the Tuckers Cross Roads Community died peacefully at his Trousdale Ferry Pike home on Thursday afternoon January 16, 2020. His brother had stepped out of the house for a few minutes to talk to a neighbor and when he came back into Doug’s home he was sitting on the couch and had died. Mr. Hall had been in failing health for a while but had continued to live by himself.

Funeral services from the Ligon & Bobo Funeral Home were conducted on Sunday afternoon December 19th at 2 p.m. Bro. Dickie Johnson officiated and burial followed the 2 p.m. service by his parents in the Bethlehem Cemetery at Tuckers Cross Roads.

Mr. Hall was a 1964 graduate of Smith County High School where he was voted “Most Popular” boy and accomplished what few have ever done, and that was serve as class President all four years while at Smith County.

He was a member of the Beat Club his sophomore through senior year, was a member of the “Black and Gold” staff his senior year and it was said of him in the yearbook, “He was princely, active-active-active and the best known senior student. His majors were science and mathematics and his senior year he was honored to be one of the senior students selected to visit the University of Tennessee in Knoxville but would go on to graduate from Tennessee Technological University in Cookeville.

He was a Vietnam veteran who proudly served our country with the United States Air Force from 1968 from through 1972.

He then graduated from the University of Mississippi where he graduate with a degree in Jurisprudence and passed the Tennessee Bar Exam to become a Tennessee attorney.

He served as an assistant District Attorney for twenty years before retiring in 2002.

After military service he continued to serve our country in the Tennessee Air National Guard for twenty years.

As a young man his family were members of the Flatrock Church of Christ.