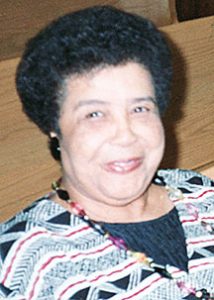 Mrs. Catherine (Cacky) High age of 93 of Carthage died at 4:21 p.m. at the TriStar Summit Medical Center in Hermitage surrounded by family and friends. She was pronounced deceased at 4:21 p.m. Saturday afternoon February 8, 2020.

Born Mary Catherine Gooch in the Riddleton Community on September 1, 1926, she was the daughter of the late Henrietta Harris Cage who died at the age of 81 on March 26, 1988 and Charlie Cage.

She was preceded in death by her husband of only twenty nine years, Clint Wallace High Jr, a Smith County Commissioner, who died at the age of 50 on December 11, 1975 from a massive stroke.

Also preceding Mrs. High in death was their son, Roane County School Board Chairman, David Wallace High, who died November 12, 2006 at the age of 49 from a heart attack while attending the state school board meeting at Opryland Hotel.

Mr. and Mrs. High also had a son that died at birth.

Mrs. Cacky was known and loved by many people who knew her while she worked at the Carthage Town Hall.

She attended the former Ward School in Smith County and graduated from Wilson County High School.

After marring and moving to Carthage in 1946 she transferred her membership to Mt. Olive Baptist Church where her husband was a member. There she sang in the choir, served as pianist, youth choir chairperson, and was active in all areas of the church work.

In her later years she decided to move to Smith County Health Care after developing some health issues and there she was very content. Mrs. High lived to play bingo and referred to herself as the “Bingo Queen”.

Her life revolved around her church life and her family; and she greatly enjoyed attending services at other churches, traveling, riding around the county sightseeing.

The Lord saw fit to bless her with a good memory until the end of her life.

One of her favorite Bible passages was Jeremiah 29:11; “For I know the thoughts that I think toward you, saith the Lord, thoughts of peace and not of evil, to give you an expected hope in your latter end.” The Lord provided this blessing to “Cacky” in her ninety three years.

Surviving is her daughter-in-law, Karen Hogan High of Kingston, and Karen and David Wallace’s two children, Keishala High Lorah and husband Jason of Knoxville, Nicholas High of South Haven, Mississippi; her cousin and caregiver, Loretta Valentine Hogan of the Stonewall Community; three great-grandchildren, Daviah, Carter and Eva High; sister-in-law, Ruth Abernathy of Nashville; a host of nieces, nephews and other relatives and friends.