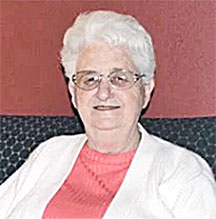 Mrs. Deering was born July 29, 1935 in Jackson County, TN a daughter of the late Luke and Nova Lee McGuire. She married William Ernest Deering on December 13, 1951 and he preceded her in death on November 17, 2009. She was also preceded in death by three sisters: Jean Hawkins, Gladys Gentry, and Clellie Dixon, and Three brothers: Bro Comer McGuire, Jesse McGuire and Ellie McGuire. She worked at the Carthage Shirt Factory for 18 years and for Robertshaw Control for 22 years. She was a member of the Gordonsville United Methodist Church.

Funeral Services for Mrs. Deering are scheduled to be conducted from the Carthage Chapel of Bass Funeral Homes on Friday, February 21, 2020 at 1PM with Bro. Jimmy Gregory and Bro Dickie Johnson officiating. Interment will follow in the Smith County Memorial Gardens in Carthage, TN.

Visitation with the family will be held at the Carthage Chapel of Bass Funeral Homes on Thursday from 11AM to 8PM and on Friday after 9AM until service time at 1PM.