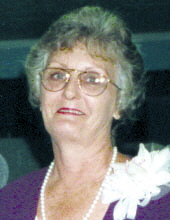 Mrs. Sherry Malone Bowman of Carthage died at 11:30 a.m. at the home of Martha Sanders in South Carthage where she had made her home for three years suffering from dementia.. Mrs. Bowman was under the care of HighPoint Hospice in Gallatin and pronounced deceased at 12:39 p.m. Mrs. Bowman was 80.

Bro. Jimmy Gregory officiated at the 1 p.m. Monday afternoon funeral services from the Carthage Chapel of Sanderson Funeral Home. Burial following the services was beside her husband in section one at the Ridgewood Cemetery in Carthage.

Two siblings preceded her in death, a sister, Anna Marie Malone Ellis who died at the age of 78 on December 11, 2003.

On August 17, 1964 she was united in marriage to Carthage native Paul Freeman Bowman who preceded her in death at the age of 64 on Christmas Day of 2000 following just thirty six years of marriage.

Mrs. Bowman was retired from the Texas Boot Co. in Carthage.

Mrs. Bowman was a 1959 graduate of the former Liberty High School in Dekalb County.