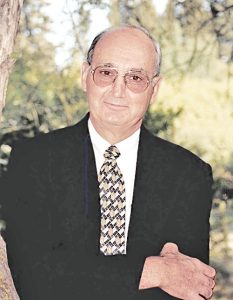 David Armistead, age 79 of Gallatin, passed away on Saturday, August 8, 2020, at St. Thomas West in Nashville.

He was born in Smith County, Tennessee , to the late Frank and Virgie (Sircy) Armistead.  He was also preceded in death by siblings, James Mundy and Joseph Armistead.

Although David was born in Smith County, his family moved to a farm in Gallatin, Tennessee when he was still young.  The bonds of farm and family were strong influences that molded his life.  In his early teens, while at home, David was saved when he accepted the Lord Jesus Christ as his personal savior.  God’s guiding could be seen throughout his life.

David graduated with a music degree from Western State, (now known as Western Kentucky University).  He went on to be a high school band director at Monticello, KY and then Gallatin High School for many years.

In the early 1970’s, David began a career in the real estate and auction business and served the community for decades in this role.  David is fondly remembered for his auctioneers chant and his enjoyment of working the crowd.

He never strayed too far from his farming roots as he for many years continued to raise cattle, quarter horses, and tobacco on the family farm.

Throughout David’s life after college, he taught music schools in local churches using the traditional shape note, or Do-Re-Mi, four part harmony method.  His way of teaching and bettering churches congregational singing was a gift, and one that would open up an entirely different chapter in his life.

In the mid 1990’s, David surrendered to go into the music ministry full time.  This developed into what was his true life’s calling.  Over the years, he taught in churches and gospel music camps that spanned 30 states, 2 Canadian provinces, and Mexico.  His influence over thousands of people and impact on hundreds of churches congregational singing will be a lasting legacy for many generations to come.

In lieu of flowers and gifts, the family is setting up a memorial fund that will be used to provide scholarships to the type of singing schools and music camps that he had dedicated his life’s work to.  The family encourages individuals and churches that have been touched by the life of David Armistead to give to this memorial scholarship fund and help to continue his legacy of teaching music in our local churches that brings honor and glory to God.  Those memorial donations may be sent to the David Armistead Music Scholarship Memorial, 7 Cornerstone Drive, Carthage, Tennessee 37030.