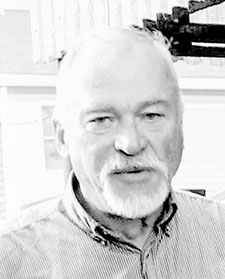 Imre Vilaghy died at 9:28 AM on June 19 at the home of Amber Newton and Scott Rousey in Carthage as his son Christoph prepared to take him outside for his first smoke of the day, five months after he was diagnosed with stage 4 lung cancer.
He was born on March 25, 1947, in Baden Bei Wien, Austria, the son of Andreas Vilaghy and Ruth (Hein) Vilaghy.  He grew up in Austria but as an adult, discovered he enjoyed working with handicapped children.  He spent seven years living and working in Camphill Schools for the mentally handicapped in Northern Ireland, Scotland, South Africa and England, and then immigrated to the United States with his wife, the former Joanne Bleezarde from Ravena NY, and their sons Erik Andreas and Christoph Joseph.
He soon became a citizen and was delighted by how easy it was to start a business in the US.  He was a car mechanic, a chimney sweep, and then a farmer.  He started Our Daily Bread bakery, sold baked goods in the Greenmarkets in New York City, and opened a coffee shop and internet cafe on Warren Street, in Hudson, NY, The Oasis.  When the former Lawrence’s Tavern, up the street, came on the market he bought the restaurant and the building it was in and The Wunderbar and Bistro were born.

After 8 years operating The Wunderbar, he sold it and bought a boat.  He lived on the boat for three years, sailing it up the Hudson River, through the Great Lakes and back on the Erie Canal.  Eventually, he tired of the sea and traded the boat for an RV, realizing his dream of traveling around the country.  He spent several winters in Texas and Florida, returning to New York for the summers until he happened upon an RV park for sale in Granville, Tennessee.

He bought Made in the Shade RV Park in 2016, managed it and lived in it until the last two months of his life when he moved into the home of his friends, who lived nearby.  He declined treatment and spent no time in hospitals except for testing.  He died on his own terms, in little pain, and with his head screwed on tight.  His body was cremated and his ashes scattered in several places meaningful to him.

He leaves behind his sons Erik Andreas of Schenectady, NY and Christoph Joseph of Athens, NY, his former wife Joanne Villaghy of Philmont , NY, his aunt Edith Rudolf and her daughters Eva and Alexandra, his stepmother Sylvia Vilaghy Briebauer and his half-brother Andreas Vilaghy, who all live in Austria, and his little dog, Jasmine.

To sign the online guestbook and to send the family a message please visit: www.crestlawnmemorial.com
Arrangements entrusted to Crest Lawn Funeral Home-Cremation Center.
Posted in Obituaries