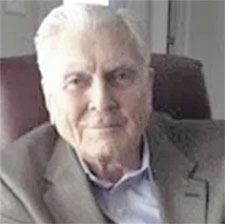 Mr. Hall was born March 30, 1928, son of the late Nelson Russell and Mary Jane Grandstaff Hall. He was preceded in death by a son: Billy Charles (Chip) Hall II, and a brother: Nelson Eugene Hall. He was a retired Sergeant Major from the United States Marine Corps with 30 years of service serving during WWII, Korea, and Vietnam. He had also worked at Dupont.

Graveside Services and Interment for Mr. Hall are scheduled to be conducted from the Hillview Memorial Cemetery in Alexandria, TN, on Thursday September 24, 2020 at 11AM.

Family and friends of Mr. Hall will gather at the Hillview Memorial Cemetery on Thursday September 24, 2020 just prior to the 11AM
Graveside service.