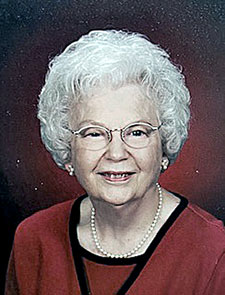 Funeral services were conducted by Jon Ledbetter and Chris Coil on Monday afternoon September 21st at 2 p.m. from the Livingston Church of Christ where she was a member and tireless worker in the programs and efforts of the congregation. Burial followed in the Apple-Wright family lot in the Garden of Gethsemane at Smith County Memorial Gardens.

She was united in marriage to McClures Bend Community native Freeman Apple who died at the age of 68 on May 7, 1987.

Together they owned and operated the Freeman Apple Oil Co. in Livingston and the Mixon-Nollner Oil Companies in South Carthage and Lafayette until Mrs. Apple sold the Mixon-Nollner Distributorships to their son and daughter-in-law, Donnie and Rita Apple in 1989.

She mourned the loss of her son, Don Freeman (Donnie) Apple who died of a blood clot of the lung at the age of 65 on February 4, 2019.

Believed to be the last surviving member of the class of 1940 at Smith County High School, she had the nickname of “Tooty” and in her annual it said of her, “Honest labor bears a pretty face.”

This notice provided as a courtesy to the Apple family.