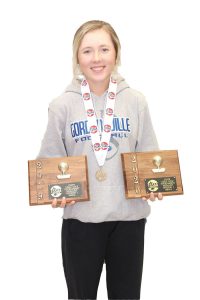 The repeat champion also pulled away from Adamsville High’s Karson Adkins who she was tied with after round one of the championship last Tuesday at WillowBrook Golf Club in Manchester. The nationally ranked amateur took charge during the second round of the tournament last Wednesday — claiming first place with a five stroke advantage. Linder shot six under par including five under 67 on the final day to claim the title.