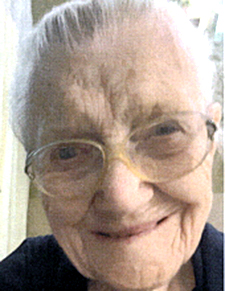 Mrs. Cornell Matthews, a homemaker of the Graveltown Community, died at the Smith County Health and Rehabilitation Center in Carthage, where she had made her home since September 9, 2011, at 5:24 a.m. Thursday morning December 17, 2020 four months and two days before her 100th birthday.

Mrs. Matthews was at the Carthage Chapel of Sanderson Funeral Home. Bro. Jimmy Gregory officiated at the 1 p.m. Sunday afternoon December 20th graveside services in the Garden of the Cross at the Smith County Memorial Gardens and burial followed beside her husband.

Mrs. Matthews was one of two daughters and two sons and was born Rachel Cornell Hance on April 29, 1921 in Gainesboro the daughter of the late James M. (Jim) Hance who died February 25, 1965 at the age of 74 and the late Amanda Myrtle Newberry Hance who died November 18, 1995 one month and twenty six days before her 100th birthday.

On February 7, 1953 she was united in marriage to Ashhopper Hollow Community native Fred Lee Matthews. He preceded her in death on April 30, 2002 at the age of 80 following over forty nine years of marriage. They never had any children but as can be seen in the survivors below they had a great extended family.

Mrs. Matthews was a non-denominational Christian.