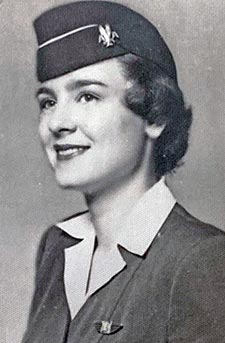 Mrs. Johnson was born February 15, 1932 in Smithville, TN, a daughter of the late Ernest Malone and Claudine Grooms Malone. She was also preceded in death by her Husband; Retired American Airlines Captain, Charles R. “Cotton” Johnson and a sister; Judy Malone Cox.

Mrs. Johnson pioneered the Stewardess Corp with American Airlines and later moved to Chicago as Chief Stewardess between 1952 and 1957. She served as Director of the housing authority in Shelbyville for 5 years. She also served the City of Shelbyville on the Beer Board. Mrs. Johnson earned her realtors license and worked for 25 years, becoming President of the Middle Tennessee Board of Realtors. She was also an active member of the Kiwanis Club where she served as President.

The family will hold private services at a later date.

The family requests memorials in Mrs. Johnson’s memory be made to St. Jude.