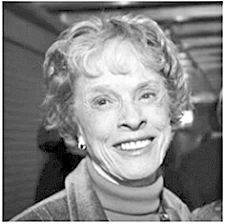 Faith Adams Young, born in Atlanta on October 5, 1927 and died February 1, 2022 at her beloved Dixona surrounded by family.

She was predeceased by her parents, Adam Gillespie Adams, III and Mary Faith Yow Adams, and her husband, William (Billy) Martin Young, Jr.

She is survived by her son, Stephen G. Young (Mandy) of Nashville; her three grandchildren, Haynes, Adam and Mary Neely; her sister, Susan Adams Andrews, numerous nephews and nieces and extended family.

Outspoken and adventurous, Faith, (Faithie or Faify to her grandchildren, nephews and nieces) was the daughter of Adam Gillespie Adams, III of Nashville and Mary Faith Yow Adams of Atlanta and Lavonia, GA. Shortly after marriage, they relocated to Coral Gables, FL where Faith grew up. Faith attended Coral Gables Elementary and Ponce de Leon H.S., Florida State College for Women (today’s FSU), transferring after two years to University of North Carolina, Chapel Hill from which she graduated in 1949. There, she played a leading role in student written and directed productions and following graduation, she joined the cast of Playmakers Theater at Hollins College before returning to Miami to take jobs in photography and an attorney’s office.

She later moved to Manhattan to work at an advertising firm on Madison Avenue. She lived with friends in an apartment on Fifth Avenue, half a block from Metropolitan Museum, fully embracing New York life. Faith then moved to Atlanta to work for a CBS TV station, but she returned to New York to work at the CBS headquarters where she became Walter Cronkite’s personal assistant for many years while he was the anchor for the evening news. Afterwards, she worked briefly for a public relations firm before putting eight years of New York life behind her to live in France for two years. She toured Europe and behind the “Iron Curtain”. She studied French at Alliance Francais in Paris, and then moved to Tours where she worked as an au pair. She moved to Grenoble, France where she skied the French Alps. She spoke French so fluently that she was often thought to be French.

She returned to Nashville, near her sister, worked at Vanderbilt University in the alumni development office and enrolled at Peabody in the education department where she took French classes. She was a student teacher at the Peabody Demonstration School (today’s University School). A friend introduced her to Billy Young, who was described as a gentleman “who lived in the country”. Billy lived, and always had, in Dixon Springs, TN on a farm, the exact opposite of all Faith knew. They married in 1969 and settled into Dixona, the oldest home in Tennessee built in 1787-1788. Farm life became her life, and she raised her son, Stephen, as a farm boy. She defended the old home and community from the powerful adversary, TVA, and its attempt to build nearby the world’s largest nuclear power plant. After a ten-year struggle of protests, lawsuits, and hijacking TVA board meetings, TVA terminated the planned build.

Faith turned her attention to civic work, leading for almost ten years the Smith County Historical and Genealogical Society as President and served on the boards of Smith County Heritage Museum, Leadership Opportunity for Smith County and Dixon Springs Preservation Association. Faith preserved Dixona Farm forever by placing a conservation easement with the help of the Land Trust of Tennessee. She founded a Community Foundation of Middle Tennessee fund to preserve historic properties in Sumner, Trousdale and Smith counties. She was proud of Dixona’s placement on the National Trust of Historic Places list and was instrumental in the placement of other properties in Smith County on the registry. Faith has been a recipient of a Tennessee Alliance for Progress award for environmental work. She was a lifetime member of Delta Delta Delta college sorority and was an active member in Junior League in Miami, Atlanta and New York. She was a summer resident of Beersheba Springs, TN enjoying the comradery with many Adams and Howell cousins.

She cherished extensive travels, especially backpacking the Grand Canyon, enjoying the Galapagos Archipelago, Tanzania and Kenya on safari, overnighting in the Everglades and traveling by bus and car across America to Billy’s WWII 36th Fighter Group reunions. Faith was a lifelong Democrat, voting at all opportunities and frequently working for and supporting candidates. She enjoyed being in her book club. She loved her son, Stephen, and her grandchildren who brought her great joy. Her extended family included dogs of varying breeds and an occasional feline plus beloved horses, donkeys and a herd of polled Hereford cattle.

A celebration of life will be held at Dixona Farm at a later date. Once arrangements are set, they will be announced.