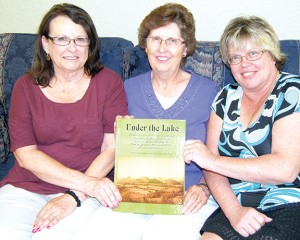 DROWNING IN MEMORIES – “UNDER THE LAKE”

Three DeKalb County women have spent the past four years resurrecting memories that were buried beneath the waters of Center Hill Lake seven decades ago.

The result is “Under the Lake,” a 304-page hardcover book that weighs four pounds and holds more than 1,000 photographs and 8,000 names.

The subtitle of the monumental undertaking by Carol Denson Williams, Judy Taylor Fuson and Ria Baker is “Historic Images, Stories and Genealogy of Life Along the Caney Fork River, Tn. DeKalb, Putnam, Warren and White Counties of Tennessee.”

The first printing of 400 copies sold out in seven days. A second printing should be coming.