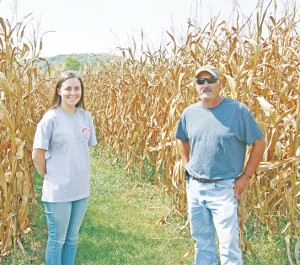 GET LOST – IN AMAZE N CORN

With the increasing popularity of agri-tourism, a local farmer has opened a corn maze in the New Middleton community.

As the fall season arrives, Danny Driver has converted a portion of the family farm located on Mulherrin Road into Amaze N Corn, an agri-tourism venture which features a three acre corn maze.

In addition to the corn maze, activities include a hay ride on a 28 foot wagon, trip to the pumpkin patch, live animals, cow milking and a giant slide.

The approximately one mile corn maze is confined to a three acre, squared-off cornfield.

For those not up to the entire maze, there is an escape route at the half-way point.