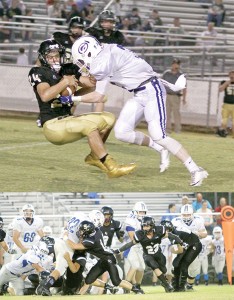 The Gordonsville High Tigers earned their first win of the 2016 high school football season in impressive fashion — with a 56-14 victory against the Clay County High Bulldogs. Last Friday night, the Tigers’ offense could do no wrong as they racked up 421 yards against the Bulldogs. Those 421 yards included 206 yards on the ground. Gordonsville sophomore rusher Braxton Givens was the work horse for the team — rushing for 182 of the Tigers’ 206 rushing yards. Givens’ 182 yards was more than the total offensive yardage for Clay County in the game, 105. The Tigers showed no signs of rust following their week off as they roared out to 42-8 first half lead — scoring touchdowns on their first six drives. READ MORE IN THIS WEEKS COURIER

Last Friday night at Owl Stadium, the Smith Co. High Owls football team welcomed a familiar foe to town in longtime district and region rival Livingston. The Owls had their most productive offensive night of the season to register a 28-14 win over the Wildcats to even their overall mark to 2-2. Smith Co. had 340 total yards and scored on their first three possessions with a balanced attack which featured 175 passing yards and 165 rushing yards. Smith Co. scored on all three first half possessions in building a 21-7 lead at intermission — never trailing the Class 4A Wildcats. Smith Co.’s defense improved on stopping the opponent’s run game as Livingston had 38 rushes for 127 yards which was far below the Owls’ seasonal average of 5.76 yards per carry coming into last Friday night’s encounter. READ MORE IN THIS WEEKS COURIER