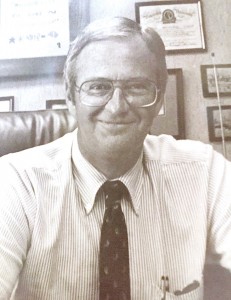 William R. Rackley of Carthage died on Wednesday, September 14, 2016 with family at his side.

After a few years in Houston with Armco Steel Company, he joined the Chris Fields Roofing Company in Memphis where he rose to the position of Vice President. In 1974, he moved to Carthage and formed Rackley Roofing Company, specializing in commercial and industrial roofing. He served as president of the Tennessee Association of Roofing Contractors for several years.

He was married in 1957 to the former Salter Neal and their 59 years of marriage were filled with many joys and adventures. They circled the Eastern U. S. in their boat, they skied with friends in Colorado and Europe; and traveled to many parts of the world.

Visitation will be on Sunday, September 18, 2016 from 2 – 4 at Fellowship Hall of Carthage United Methodist Church, with service to follow, conducted by dear friend, Reverend Bedford Transou.

There will be a visitation at Bennett May Funeral Home in Pulaski on Monday, September 19, 2016 at 1:00 p.m. with private burial at 2 p.m. at Fogg Cemetery in Giles County.

This notice provided as a courtesy to the Rackley Family.
BASS OF CARTHAGE
Posted in Obituaries