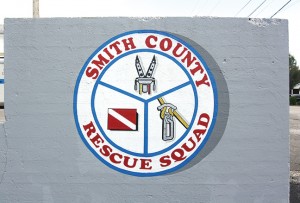 In the fall of 1966, a drowning occurred on the Cumberland River near Carthage.

There were no grappling hooks in Smith County to drag the river bottom for the victim.

In 1964, a local group called the Smith County C.B. (C.B.) Radio Club (who operated their radios on channel 11) met regularly at the former Upper Cumberland meeting room on North Main Street in Carthage.

Standing on the banks of the Cumberland River in the cool breeze one morning, members of the Smith County C.B. Radio Club decided the county needed a rescue squad.

On October 4, 1966, the Smith County Rescue Squad was established.

On October 23, 1973, the rescue squad was incorporated under the laws of the state of Tennessee as a non-profit organization.

Twelve men from the radio club comprised the first group of rescue personnel.

Some of the members chose not to participate in the squad.

READ MORE OF THIS STORY IN THIS WEEKS CARTHAGE COURIER