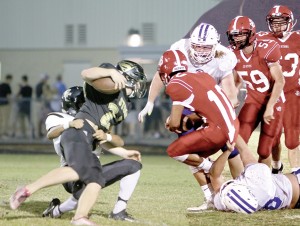 TIGERS
The Gordonsville High Tiger football team continued their Region 5-A success last Friday night with a 34-13 victory over the Jo Byrns High Red Devils. Gordonsville roared to a quick 14-0 lead in the games first six minutes, but weathered a two touchdown comeback from the hosts that made the region duel a one point game, 14-13, only four minutes prior to halftime. The Tigers though were not about to be outdone. A two touchdown Tiger scoring spree in the final 2:20 of the half regained control for Gordonsville. The Tiger defense went into lockdown mode in the second half — allowing only 13 total yards for their third straight region win. The win extended Gordonsville’s region win streak to five — including two wins at the end of last season against Pickett County and Red Boiling Springs. The victory also improved the Tigers’ region record to 3-0 this season. READ MORE IN THIS WEEKS COURIER.

OWLS
The Smith Co. High Owls’ football team could never slow down the Stone Memorial rushing attack as the Panthers improved to 6-0 with a 49-14 win last Friday night in Crossville. The Panthers’ ground game, led by junior Cody Wyllins, had 346 yards in 33 carries with their first team unit — scoring on six of their first seven possessions — in cruising to the 35-point win. “We knew coming into the game that Stone Memorial, with their wing-t offense, loved to run the football,” stated Owls head coach Mike Dickerson. “We never could get them stopped as they only had three third downs in the first three quarters with their first unit. Our defense has to step up to the challenge and stop opponents running game over our last four regular season games if we are to have any chance of making the playoffs.” Smith Co. dropped to 2-4 overall with their final non-region game of the season — tallying only 51 second half yards with the Panthers surging to a 22-0- scoring run to blow the game open. READ MORE IN THIS WEEKS COURIER.