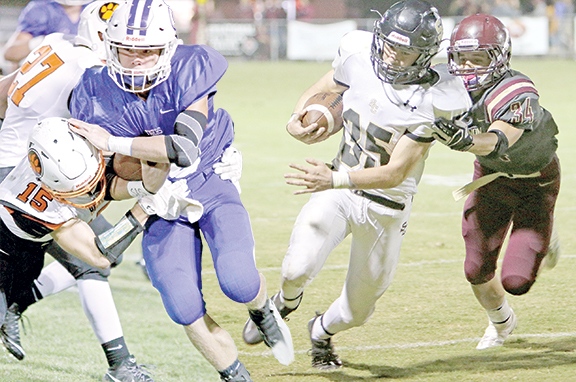 – OWLS PUT IT ALL TOGETHER ON ROAD AT LIONS’ EXPENSE

The Smith Co. High Owls’ football team put together one of their best performances of the year with a 42-3 Region 4-3A victory in Woodbury over Cannon Co. last Friday night. The Owls’ defense held the Lions to only 95 total yards while the Owls’ offense had their best performance of the season — exploding for 508 yards in only 52 offensive plays. Seven different Owl rushers and seven different Owl receivers accounted for seven plays of over 25 yards as Smith Co. stormed to a 36-3 halftime lead and never looked back in improving to 3-4 overall and 1-2 in region play. READ MORE IN THIS WEEKS COURIER

The Gordonsville High football team has ended bids for undefeated seasons twice this year. The Tigers ended Trousdale County High’s hopes of a perfect season on September 9 — with a 9-0 victory at Turney Ford Field. Last Friday night, Big Blue Nation witnessed their Tigers end another undefeated season at home — handing high-scoring Middle Tennessee Christian School’s Cougars from Murfreesboro a 35-21 setback. The Cougars arrived in Gordonsville with a perfect 6-0 record — including four Region 5-A victories and averaging a gaudy 46 points per outing. Gordonsville entered the contest with two non-region blemishes on their record, but like the Cougars — were undefeated in region play. The Tigers’ win was pivotal in order for them to keep pace with region favorite, Nashville Christian. READ MORE IN THIS WEEKS COURIER