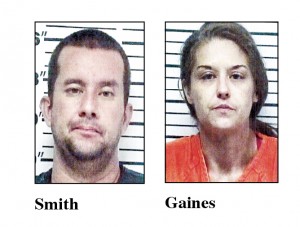 The incident began when a Sammy Lane South resident reported an unoccupied vehicle parked on his property shortly before 6 p.m.

Sgt. Dusty Hailey went to the area and discovered two suspicious individuals, a male and female.

Sgt. Hailey called for backup after the subjects failed to halt at the officer’s request.

Sgt. Hailey chased after the subjects in a wooded area near a field.

Sgt. Fields deployed his drug and tracking dog Constance during the pursuit.

According to Chief Deputy Eugene Roberts, the two had taken three vehicles during the day in the Nashville area.