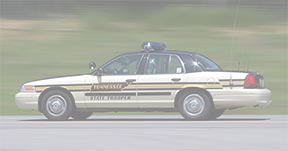 The Tennessee Highway Patrol made a felony stop on a food van reported stolen out of North Carolina at Interstate 40’s Gordonsville Exit.

According to an arrest warrant, Trooper Brandon Jackson was patrolling the interstate when a “bolo for a stolen van was put out over dispatch with the last ping on the GPS at the 280 mile marker, west bound on Interstate 40.”

Trooper Jackson observed the vehicle at the 267 mile marker.

After verifying the description of the vehicle and license plate, Trooper Jackson and other law enforcement officers stopped the vehicle at the Gordonsville Exit.

Nickles Darby, 30, Bristol, the driver of the vehicle, was taken into custody and charged with theft over $10,000 and driving while license suspended (second offense).