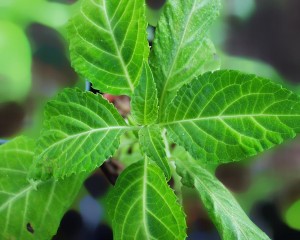 A not so common psychoactive plant was discovered during a recent arrest made by a sheriff’s department deputy.

Salvia divinorum is a plant native to Mexico and can “induce visions and other altered experiences”, according to Wikipedia.

An Elmwood resident was recently charged with possessing the plant.

While on routine patrol on Cookeville Highway (Highway 25), sheriff’s department Deputy Matt Bush came across a man walking along the highway.

“I observed the male staggering in the roadway as he was walking,” according to the deputy’s offense report.

Deputy Bush made contact with the individual identified as Brandon Aaron Bezenah, 26, in the parking lot of B&B Restaurant.

“Upon speaking with Mr. Bezenah, I could smell an odor one would associate with alcohol coming from his person. Mr. Bezenah was very unsteady on his feet and had blood shot eyes,” according to the report. Bezenah told the officer he drank two beers before leaving his house to go to Walmart.