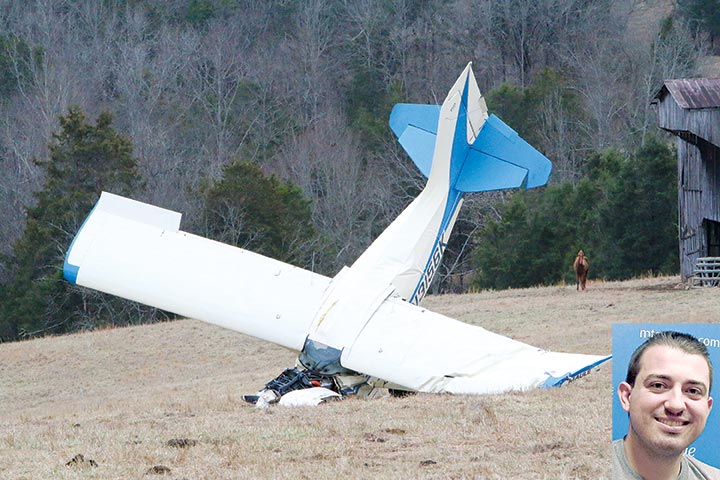 The pilot of a single engine airplane is recovering at home after surviving a crash in South Carthage.

Collin McDonald was airlifted to Vanderbilt University Medical Center in Nashville following the crash which occurred around 3:43 p.m. on Wednesday.

McDonald was released from the hospital on Thursday.

The site of the crash was a private air strip located on a farm off McCall Street.

Initially, a caller to 911 reported a suspected airplane crash at 3:43 p.m., but an exact location was not known.

The caller was located in the parking lot of a pain clinic on Highway 70 in South Carthage, a good distance from the crash site.

Emergency personnel were dispatched to the area to search for a possible crash site.

At 3:47 p.m., a caller contacted 911 with an exact location of the crash site and fire, rescue and ambulance units were dispatched to the scene.

“Some of the neighbors saw the airplane go down and helped him get out of the plane. They laid him down about 50 feet from the crash site until emergency personnel arrived on the scene,” said Smith County Emergency Management Agency Director Sonny Carter.

McDonald was awake and talking with neighbors who helped him from the plane and with emergency personnel who arrived on the scene minutes later, Carter said.

Collin is expected to make a full recovery after reconstructive facial surgery, according to his family.

While in his early 20s, McDonald is an experienced pilot, having studied aviation at Middle Tennessee State University in Murfreesboro and flown several thousand miles.

The airplane crashed in rolling pasture land not far from the McDonald residence and the family’s private runway and hangar.