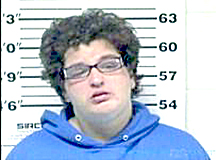 A woman wanted in Arizona was located in Carthage.

Everest is wanted for aggravated assault with a deadly weapon.

The investigation began when a female in Phelps Court, located on Swope Road, phoned 911, reporting an unwanted guest.

Upon arrival, the unwanted guest told the police the female caller was wanted in the state of Arizona.