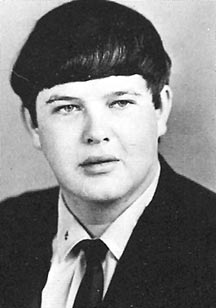 Mr. David Russell age 68 of Ashland City, and who was reared in the Cartwright Community, died peacefully at his home early Monday morning February 6, 2019.

A memorial service to celebrate his life is scheduled for family and friends on Saturday March 18th at 2 p.m. at the Ashland City Senior Citizens Center. Chaplain Byron Dumas will officiate.

He was preceded in death by a brother-in-law, longtime Moss Service and Supply Co. partner, Ernest Corum Sutton who died May 9, 1998 at the age of 66.

Mr. Russell was a 1967 graduate of Smith County High School where he majored in building trades and his senior year was secretary of V.I.C.A., the vocational and industrial club.

One of his favorite pastimes was the “The Second Generation” band which was made up of himself, Terry Gibbs, Norman Reid and Randy Dillehay.

After graduation from Smith County High in the spring of 1967 he desired to serve our country during the Vietnam War and joined the United States Air Force and was inducted on January 2, 1968 where he served for four years before being honorably discharged with the rank of Sargent at Lowry Air Force Base in Denver, Colorado on December 8, 1971. He served in Vietnam for one year and was with the 3424th Instructional Squadron Air Training Command. For his meritorious service he was awarded the National Defense Service Medal, the Vietnam Service Medal, the Air Force Good Conduct Medal and the Reconnaissance Vietnam Civil-Military Operations Medal.

After leaving service he spent his career in law enforcement with the Tennessee Department of Corrections, Gaylord Security and finally with Trinity Industries.

As a youth his family attended the Russell Hill Missionary Baptist Church.

This notice provided as a courtesy to the Russell family.