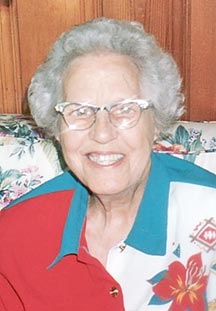 A sister, Gladys Beatrice Sloan Kemp, died December 11, 2007 at the age of 90 and two brothers preceded her in death, South Carthage businessman, tobacco warehouse owner and Graveltown Community farmer Billie “Little Billie” Sloan who died September 14, 1980 at the age of 67 and prominent Carthage Physician Dr. Lillard R. Sloan who died of a massive heart attack on January 28, 1958 at the age of 47 while making a house call on Morris Avenue in Carthage.

In Ringgold, Georgia on June 10, 1942 she was united in marriage to Turkey Creek Community native Henry Elisha High.

In 1949 Mr. and Mrs. High along with Mrs. High’s father Herbert “Pa” Sloan began the Spring Street Motor Co. selling Dodge, Plymouth and Chrysler products following the transfer of the dealership rights from Kirby Bros., Carl and Gerald, who had decided to enter other endeavors.

Mrs. High was a 1937 graduate of Carthage High School and attended the Tennessee College for Women in Murfreesboro.

She was a member and Past Worthy Grand Matron of the Carthage Chapter #190 Order of the Eastern Star. She was also an active member of the Smith County Democratic Women and her favorite pastime was playing bridge with the Carthage Bridge Club.

Mrs. High was a member of the Carthage First Baptist Church.

The High family requests memorials to either the Pleasant Shade Cemetery mowing fund or the Carthage First Baptist Church.