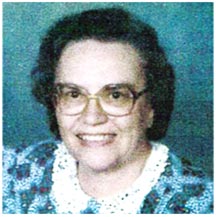 Helen was born to immigrant parents in Stevens Point, Wisconsin on August 6, 1932.  Because of hardships during the great depression, the family returned to Yugoslavia when she was 6 years old.  At age 11, the town where Helen lived was turned into a work camp by the Russian army.  She was later transported to Gakowa, a concentration camp on the boarder of Hungary. Here she survived for 2 ½ years until her successful escape with 16 others to Germany and her eventual return to the United States of America to live with her Aunt, at the age of 16.

Helen met her husband, Stig Anderson, when he was a seminary student, and they were married August 9, 1953 when she was 21 years of age.  They were happily married for 63 years and together raised three sons.  Helen is survived by her sons Paul (his wife Melinda and children Jonathan and Morgan) of Chestnut Mound, Tennessee; James (his wife Kathy and children Evan and Cara) of Tampa, Florida; and David (his wife Cornelia and children Alexandra and Daniella) of Beltsville, Maryland.  She is also survived by two great-grandchildren and her sister, Elizabeth Grass of Stuttgart, Germany and many cousins, nephews and nieces.

Helen was a devoted wife and mother but also held many positions over the years as a nurse’s aide and office clerk, but cherished her role as a minister’s wife – supporting the church and the missions each congregation undertook to spread the gospel to the communities they served.  She was also passionate about gardening, cooking, and will be remembered for recognizing birthdays and anniversaries with hand-written cards.

In lieu of flowers, memorial donations may be given to the American Heart Association.  Condolences to the family may be left on Helen’s online memorial website at www.bassfh.com.