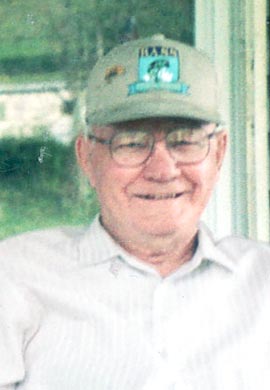 A Granville Community centenarian has died at the age of 102.

Mr. Carl Gilley, who made his home following retirement in 1990 on Eagle Ridge Lane in the Granville community, died at 6:04 p.m. Friday evening March 24, 2017 at the Waters of Smyrna Healthcare in Smyrna where he was being cared for since November 28, 2013.

Graveside services and interment for the World War II Veteran were conducted Tuesday afternoon March 26th at 1 p.m. at the Woodlawn Memorial Park on Thompson Lane in Nashville. He was laid to rest with military honors beside his wife who died in 1990 just before moving to their new home in Granville. His granddaughter Paula Veal delivered the eulogy.

The son of the late Lester and Hattie Harrell Gilley, he was one of their five children and was born Louie Carl Gilley in the Walter Hill Community of Rutherford County on January 4, 1915.

All four of his siblings preceded him in death. They were Raymond Gilley, James Edward Gilley, Ester and Mary Gilley.

He was also preceded in death by his wife, the former Dimple Irene Moore, who died May 16, 1990.

Mr. Gilley retired in 1985 from the Glen Mere Die Company and he and his step-son owned and operated the Dimple Furniture Service in Antioch until retiring in 1989.

He was a member of the Rosebank Baptist Church.

On May 15, 1941 he was enlisted into Company D, 9th Brigade at Fort Knox, Kentucky and did his basic training at Fort Oglethorpe, Georgia. For his meritorious service he was enrolled in the “Roll of Honor” of the World’s Great War for Freedom and awarded the U. S. Defense Medal on February 13, 1943. On October 6, 1943 he was honorably discharged from the United States Army at Camp Claiborne, Louisiana with the rank of Staff Sergeant. His total service to our country was two years, four months and twenty one days.