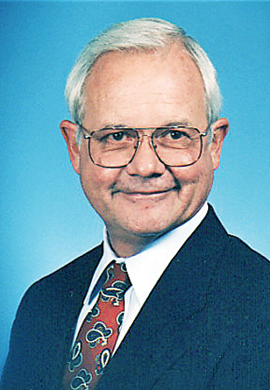 Banking was central to the working life and legacy of Citizens Bank President Paul E. Hackett who passed peacefully from this life Friday morning March 31, 2017. Death came at 2:08 a.m. and he was at his Morris Drive home with his wife, daughter and granddaughter.

He was pronounced deceased at 3:31 a.m. by Gentiva Hospice who had assisted the family in caring for him since being diagnosed with cancer on June 1st of 2016.

An infant brother Billie Kenneth Hackett died at the age of 2 weeks old on December 10, 1932.

On July 9, 1960 at the home of the late Eld. Kenneth Gibbs he was united in marriage to Enigma Community native, the former Frances McDonald.

He was saved at the age of 12 in 1952 and was baptized into the full fellowship of the Monoville Baptist Church and in 1962 he transferred by letter his membership to the North Carthage Baptist Church where he continued to serve as a church trustee until his death.

Surviving in addition to his wife of almost fifty eight years is their daughter, Martha Holladay and husband Ricky of Gordonsville; granddaughter, Elizabeth Rockwell and husband Patrick and their daughter Carolyn Grace Rockwell of Brentwood; sisters, Mary Woodard and husband Billy of Nashville, Linda McDonald and husband L. B. of Carthage; and his mother-in-law, Christine McDonald of Carthage who died just a little over a month shy of her 99th birthday on Saturday morning April 1st after Paul had died March 31st.

The Hackett family requests memorials to the Jordan Hackett Foundation.