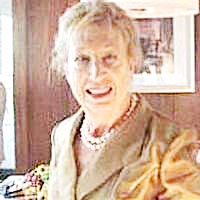 Mrs. Jean Bastian of the Doyle Community in White County and a longtime Carthage resident died at the age of 84 at 5:50 a.m. Friday morning May 26, 2017 at the Cookeville Regional Medical Center.

Funeral services were conducted Monday afternoon May 29th from the Sparta First Baptist Church with Hunter Funeral Home in Sparta the directors. Brad Walker officiated and burial followed the 2 p.m. services in the Anderson Cemetery.

Born Jean Ward Goddard in Doyle on December 1, 1932, she was the daughter of the late Henry Orville and Anna Bessie Ward Goddard.

She was an accomplished artist, having used a wide variety of avenues, especially in watercolors.

Her work was widely acclaimed and won praises statewide and her works of art were displayed in such prominent places as the McDonald’s Headquarters in Chicago, at UBS in Cookeville and she had a painting of conservation which won statewide as the Trappers National Award plus third place in the national contest.

Historically Mrs. Jean was noted for her love for all Tennesseans, The Hermitage, Cragfont in Castalian Springs and the Sam Davis home in Murfreesboro along with many historical places she recreated in art.

Perhaps the most treasured of her paintings were those she painted for her friend’s personal homes which have become treasured keepsakes.

Children were a favorite of Mrs. Bastian.

Concerning art, the following quote by Picassos summarized her artistic philosophy, “Art Washes Away From The Soul The Dust of Everyday Life”.

This notice provided as a courtesy to the Bastian family.