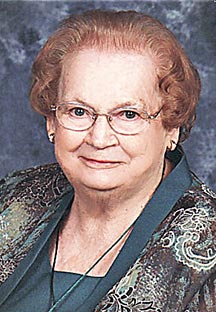 Funeral services were at 3 p.m. Sunday afternoon June 11th from the Hackett Chapel of Sanderson Funeral Home conducted by her son-in-law, Carthage Church of Christ minister Edward L. Anderson assisted by her two grandsons-in-law, Mark Denning and Dr. Michael Thomas. Burial followed beside her late husband of sixty one years at the Gene Butler Cemetery in Brooks Bend.

In Bowling Green, Kentucky on November 13, 1943, she was united in marriage to William Bedford Dixon, a native of the Gladdice Community and himself one of twelve children. Mr. Dixon preceded Mrs. Dixon in death on November 8, 2004 at the age of 83.

Mr. and Mrs. Dixon reared their only daughter in the Bagdad Community and following Mr. Dixon’s death she resided with her daughter and son-in-law and attended the Carthage Church of Christ.

She and Mr. Dixon were both baptized into Christ by their son-in-law at the Montrose Church of Christ in June of 1981.