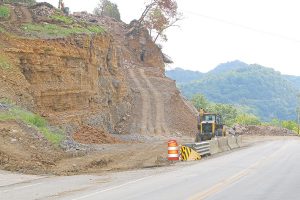 TRAFFIC ADVISORY – SR 25 Closed Until Further Notice
Unstable Rock Delays Opening
CARTHAGE, Tenn. – The Tennessee Department of Transportation is delaying the reopening of SR 25 in Carthage following unforeseen geotechnical issues on the ongoing rockfall mitigation project. The new target opening date is October 31.
The roadway was closed for safety reasons in June after deterioration on a rock bluff led to dangerous debris falling onto the roadway. TDOT has been working with the contractor to accelerate the work and had hoped to open the closed portion of SR 25 on September 4. However, the contractor has continued to encounter loose rock in the project area. Due to concerns for the safety of the motoring public, the road can’t be reopened until all loose material is removed and the bluff is stabilized.
Since the start of August, the contractor has been able to remove approximately 48,000 cubic yards of material. TDOT estimates another 75,000 cubic yards will need to be removed in order to safely open the roadway.
The $4.1 million SR 25 rockfall mitigation project began earlier this spring. The project follows a rockslide in the area in 2013 which required a roadway closure for 20 days.
Posted in News