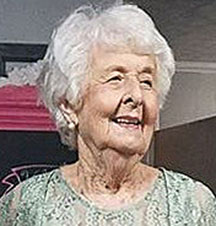 Funeral services under the direction of the Hooper-Huddleston-Horner Funeral Home in Cookeville were conducted from the Cookeville First Presbyterian Church on Sunday afternoon, September 10th, at 3 p.m. Her longtime pastor, Dr. Charles McCaskey, officiated and burial followed beside her husband in the Cookeville City Cemetery.

Born Francis Marie Holladay in Smith County on May 1, 1934, she was one of two children of the late Thomas A. Holladay and Flossie Burton Holladay.

Her only sibling, a brother, Tom G. Holladay, died while undergoing military training.

On July 14, 1962 in Overton County she was united in marriage to Conditt Hollow community native Jerry Craig Overstreet. He preceded her in death on February 2, 2012, following almost fifty years of marriage.

Her entire adult life was committed to hard work and to total commitment to her husband, whom she adored.

During her working lifetime she was employed at the Mills Linen and was a former teller at First Tennessee Bank.

Following retirement she became an influential and devoted Nanny to her adopted family.

Her Godly, pure and loving nature endeared her to all who knew and came in contact with her.

She and her late husband were longtime members of the Cookeville First Presbyterian Church.

She was a member of the Cookeville Chapter, #153, Order of the Eastern Star, and was very supportive of her husband‘s involvement in the Cookeville Masonic Lodge # 266, F & AM, where he served as Worshipful Master in 2006. He was also active in York Right and the Cookeville council and the Al Menah Shriners in Nashville.

This notice provided as a courtesy to the Overstreet family.