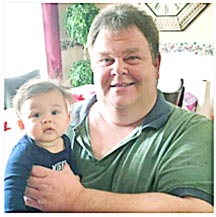 Jerry was born February 2, 1971 in Nashville, TN. He is the son of James McKee and Weibena Hackett McKee, past owners of Gordonsville Amoco. Jerry worked at Ard Trucking in Lebanon, TN, as a supervisor for several years. He loved to fish and cook, often cooking and entertaining for many of his closest friends. Jerry will be missed by a number of dear friends and family.

Visitation with the McKee family will be held at the Gordonsville Chapel of Bass Funeral Homes on Saturday from 4PM until 8PM and again on Sunday from 1PM until the time of the service at 3PM.