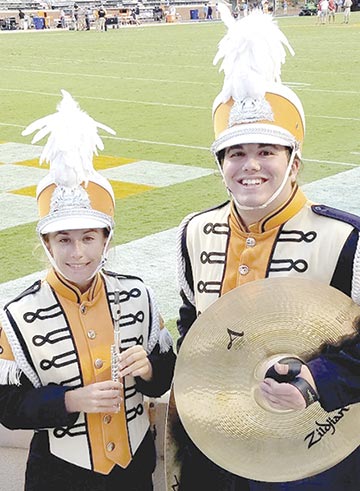 Two local teens march at the University of Tennessee. Lindsey Payne (GHS) and Tucker Miller (SCHS) along with 1500 students from across the country auditioned in June for one of 360 positions in Pride of the Southland Band.

They both received acceptance letters prior to band camp in August. Lindsey marched under the direction of Tommy Washer (2007-2014) and Tiffanii Brown (2014-2017).

Lindsey marched in the Gordonsville High School Band and played in the concert band for 10 yrs. Lindsey played various instruments during that time, including piccolo, flute and bass clarinet.

Tucker marched in Smith County High School Band for 4 yrs and concert band for 8 yrs under the direction of Tony Hibbard and Donna & Jerry Buttrum. Tucker played tenor drum for 3 yrs and snare drum for 1 yr.

They both would like to continue marching for Pride of the Southland Band until graduation.