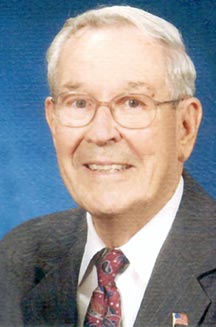 A retired Lebanon businessman and Smith County native has died at the age of 95.

Mr. McKinney was a 1940 graduate of Carthage High School where his nickname was “Crockett” and his major was in Agriculture There he was on the debate team in ’38, ‘39’ and ’40, played basketball his junior and senior years and his senior year was a member of the Hi-Y Club, which was a literary society.

He began college at Cumberland College in the fall of 1940, while being employed at the former Lea Cleaners in Lebanon, a business he would later come to own.

He met the love of his life, Katherine Reed of Wilson County while attending college. He volunteered for the military service in 1943 and on April 2, 1943 was united in marriage to Miss Reed, just three weeks before leaving for his military service.

Mr. McKinney served as a medic with the United States Army during World War II in New Guinea.

Upon his completion of service to our country, he began what would be a life-long passion in the laundry and dry cleaning profession.

He continued on to graduate from the National Institute of Dry Cleaning in Silver Springs, Maryland.

Mr. McKinney was employed at various dry cleaning and laundry establishments as a manager until in 1962 he purchased the Lea Cleaners where he had worked some twenty two years earlier.

A civic minded Lebanon citizen and businessman, Mr. McKinney served as Governor of the Valley District of Civitan International in 1977-78, President of the Lebanon Club, and many other offices and capacities in the state organization during his lifetime.

Mr. McKinney and his wife loved to travel, having visited Europe, Hawaii, Mexico and most of the states.

Above all else he was totally devoted and loved his wife, children, grandchildren and great-grandchildren.

Surviving in addition to his wife Katherine of seventy four years are their four children,

Mr. McKinney’s theory was a “A life well lived, is a life Well lived”