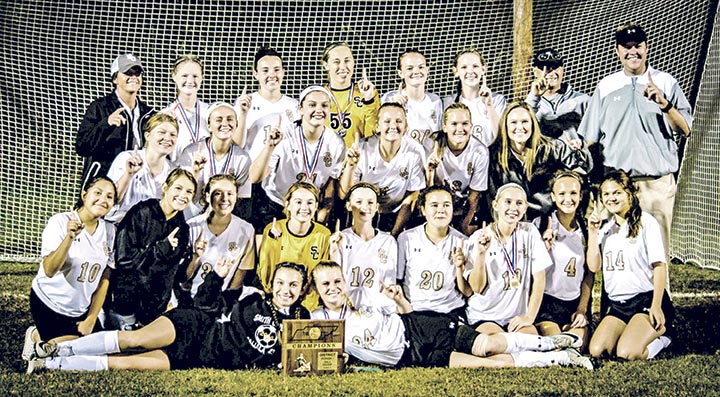 Jackson County hosted the 7A District playoffs. The Smith County Lady Owls went in as the number one seed with a record of 4-0 in district play. Last Tuesday night, Smith County faced Cannon County. Cannon’s goalie had improved since their last meeting on Smith County’s Senior Night. It still was not enough to hold off the Lady Owls. Smith County would win the game 3-0 with goals by Delaney Eldred and Katy Wright in the first half. Brennan Rigsby sealed the deal with her goal in the second half.

This win placed Smith County in the District 7A championship game. Jackson County then beat York to find their place in the championship game as well. Thursday night, Smith County and Jackson County were both excited about their district title hopes. The first half was a defensive battle. The Lady Owls dominated their territory but the strong showing of the Blue Devil goalie was not having it. The half ended with in a tie, 0-0. With a district title hanging in the balance, both teams went into the second half with purpose.

The breakthrough came when Katy Wright found her way through the Blue Devil defense and walked the ball to the net, then sent it flying to the right beating the goalie. This set the stage and pumped up the bench, the fans and the squad on the pitch. Maija Harrelson would be the next Lady Owl scorer. Jacksons goalie came out to meet a shot, lost control of the ball and Maija rushed to connect with it, sending it into the back of the net uncontested.

Later Cayce Forrester kicked the ball into the heavens, it landed inches outside the net. Before Mallory Dillon could kick it in. The goalie, on the ground, twisted around to kick it clear. Mallory battled with three Lady Blue Devils for control and finally was able to kick the ball out to Forrester. Cayce then fired it hard through traffic, under the diving goalie, to meet the back of the net. With less than ten minutes left in the game, Jackson County just could not recover. With a final score of 3-0, the Smith County Lady Owls soccer team found themselves making history.

For the first time in SCHS history, the Lady Owls soccer team won the District Title!!