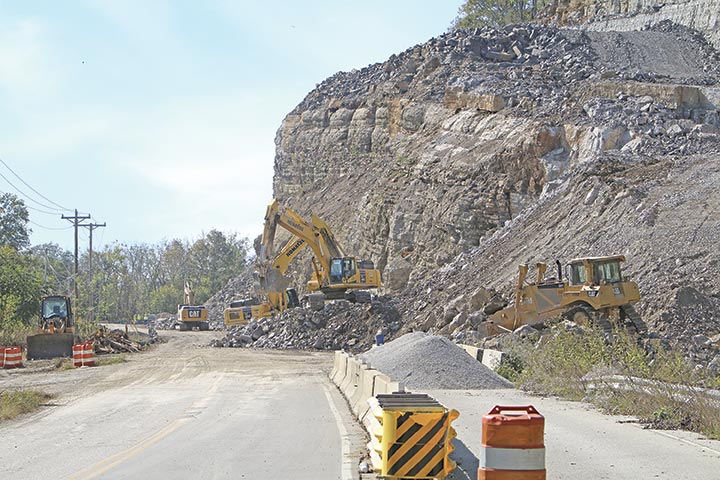 TRAFFIC ADVISORY – SR 25 Closed Until Further Notice
Unstable Rock Delays Opening
CARTHAGE, Tenn. – The Tennessee Department of Transportation has determined that the rock bluff on State Route 25 is still not stable enough to safely allow traffic on the roadway, despite contract crews removing 124,000 cubic yards of material over the last two months.
The roadway was closed for safety reasons in June after deterioration on a rock bluff led to dangerous debris falling onto the roadway. TDOT has been working with the contractor to accelerate the work and had hoped to open the closed portion of SR 25 on October 31. However, an inspection Thursday by TDOT’s Geotechnical department determined there is still a high potential for rockslides.
Due to concerns for the safety of the motoring public and work crews, the road can’t be reopened until all loose material is removed and the bluff is stabilized. TDOT will provide continuous updates on the progress, and will share a new reopening date as soon as possible.
The $4.1 million SR 25 rockfall mitigation project began earlier this spring. The project follows a rockslide in the area in 2013 which required a roadway closure for 20 days.

Monday (October 23), officials with the state’s department of transportation said Highway 25 west of Carthage will reopen as scheduled on Tuesday, October 31. Thousands of motorists are anxiously awaiting the reopening. The October 31 date is the third reopening date the state transportation department has set for the project since it closed in June.

While tons of rock have been removed from the site, tons of loose rock remain. “The contract completion date is still May 15 (2018). There is still more blasting which will need to be done. Once the road reopens, the contractor will go back to the original blasting schedule—9 a.m. to 3 p.m., Monday through Friday,” Schultz said. Rock is being transported to the Rogers Group rock quarry on Massey Road.

While the bluff has been scaled back significantly, one area is still relatively close to the roadway.