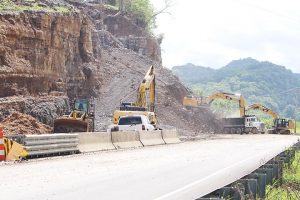 After setting three deadlines, state transportation department officials now say they don’t know when Highway 25 west of Carthage will reopen. The project is scheduled to be completed in May of next year and transportation officials now say they don’t know if it will reopen before then. When asked, Friday, if the road would reopen before the project is completed, Kathryn Schulte, community relations officer, responded, “We don’t have that answer right now. The more contractors blast, the more loose rock we encounter.

We understand people want to know a date. We have put out several deadlines we felt confident in meeting at the time, but as blasting has gone on, the slope has continued to deteriorate past our expectations. We do know we will open the road as soon as it is safe to do so.” If the road is not reopened, thousands of motorists could find themselves traveling over Hartsville Pike (detour road) through this winter.

Hartsville Pike is a county road. The county highway department has limited resources to keep the road free of ice and snow. On two occasions, a reporter for the Courier has been told by the transportation department’s public information office the state road would reopen as scheduled only to be told days later it would not.